Hi, Charlotte! Thank you for granting this interview and sincere congratulations on your ‘Outstanding Performance’ Award! You played the lead character in the film ‘The Reckoning’. What should the audience expect to see?

The Reckoning is a story of religious and misogynistic persecution in England in 1665, the year of the Great Plague.  Farmers wife Grace Haverstock who I play must grapple with the tragic untimely death of her husband Joseph in a society completely consumed by fear and death. When she rejects her landlord Squire Pendleton’s advances, she is accused of being a witch and thrown in jail to await trail. Grace must endure physical persecution at the hands of England’s most ruthless Witch-Finder Judge Moorcroft and face her own inner demons as the Devil himself begins to infect her mind and she plots revenge against her persecutors.

Tell us more about ‘Grace Haverstock, your character. Who is she? What is her personality like?

Grace Haverstock is a young mother who unfortunately becomes a widow. She is, and I quote from the movie, “an ordinary women”, but in my opinion is she is so much more than that. She has an inner resolve of strength and determination. She fights for what she believes in during the time when many other woman would ultimately give in to the agonising tortures they endured. Grace is resolved to die if she must in order to protect the two things she values most, her baby daughter, and the truth. If anything, Grace is an extraordinary woman. I doubt I could ever be as strong as she is under those circumstances!

Charlotte Kirk as Grace Haverstock in ‘The Reckoning’ directed by Neil Marshall – All rights reserved.

I did a lot of preparation for the role of Grace. I also worked many hours with the great Susan Batson who helped me get to the place I needed to be. I researched the history of the period and the lifestyle in England in 1665.  Understanding who Grace is and the era she lived in, what drives her, what made her become who she is, who is she at the start and who she becomes, her entire ark. I knew I had such a responsibility to give this character the most truthful and honest performance I could. Before going on set I would make sure I was connected to the role and that I was in a truthful and honest space.

I also watched movies to inspire me and which I thought had some correlation with the story, such as Braveheart, Gladiator and The Scarlet Letter.

My favourite line is “You stole all the mercy from my heart” near the end of the movie. I loved this line from the very moment we wrote it. It kind of tells the whole story of Grace. That these events change her, and not necessarily in a good way. When I mention Grace having an arc, from when we first meet her, she’s nothing special. Just trying to get by and full of the same hopes and fears as the rest of us. She’s a FORGIVING character at the start, and when she says this line at the end of the movie, after everything she has gone though, she is a changed women. Her heart is bent and broken beyond repair, she is no longer a forgiving, scared and vulnerable character. These men sought to strip of her of her dignity and persecute her for nothing but their own gratification. Is it any wonder she’s got little mercy for them when the tables are turned?

Charlotte Kirk as Grace Haverstock in ‘The Reckoning’ directed by Neil Marshall – All rights reserved.

I also co-wrote the script, which helped enormously in my understanding of the character of Grace and the world she inhabits, but when I was stepping into her shoes each day I started from scratch as if I had just read the script for the first time.

The fact that I helped create her gave me a profound connection and understanding, as she was part of me, but when it came to being the actor I wanted to forget and start again as see it with a fresh pare of eyes, as much as possible. I wanted to see what other things I could discover about Grace that I may not have seen from the point of view of a writer. And producing it opened my eyes to just how precarious it is making a movie, when any given day something can go wrong, however small or big, but could jeopardise the whole production. It gave me such a deeper understanding of the process of film making and that it can never be taken for granted.

In your opinion, what part of the film is going to surprise the audience and why?

I guess people are going to come to this movie expecting horror. It’s a Neil Marshall movie after all, and he directed The Descent one of the scariest movies of all times.  Well yes, you’re certainly going to get horror, in droves. It’s scary as hell, just as you’d expect. I think what people won’t expect so much, and be pleasantly surprised by, is the depth and power of the drama in this story. Despite being set in 1665, the Year of the Great Plague, it’s unbelievably relevant to the world we live in today.  When we made it last year we couldn’t haver predicted the world was going to be brought to its knees by another ‘great plague’. If ever there was a case of life imitating art, this feels like it.  But aside from that, this movie also deals with other topics that have been around for centuries, such as sexism and the persecution of women. It deals with the notion of witch hunts – both political and religious which are still very much alive and kicking today.  This is a story about resilience and fighting to uphold the truth against the odds.  It really couldn’t be more relevant to what’s going on in the world today. The more things change, the more they stay the same! 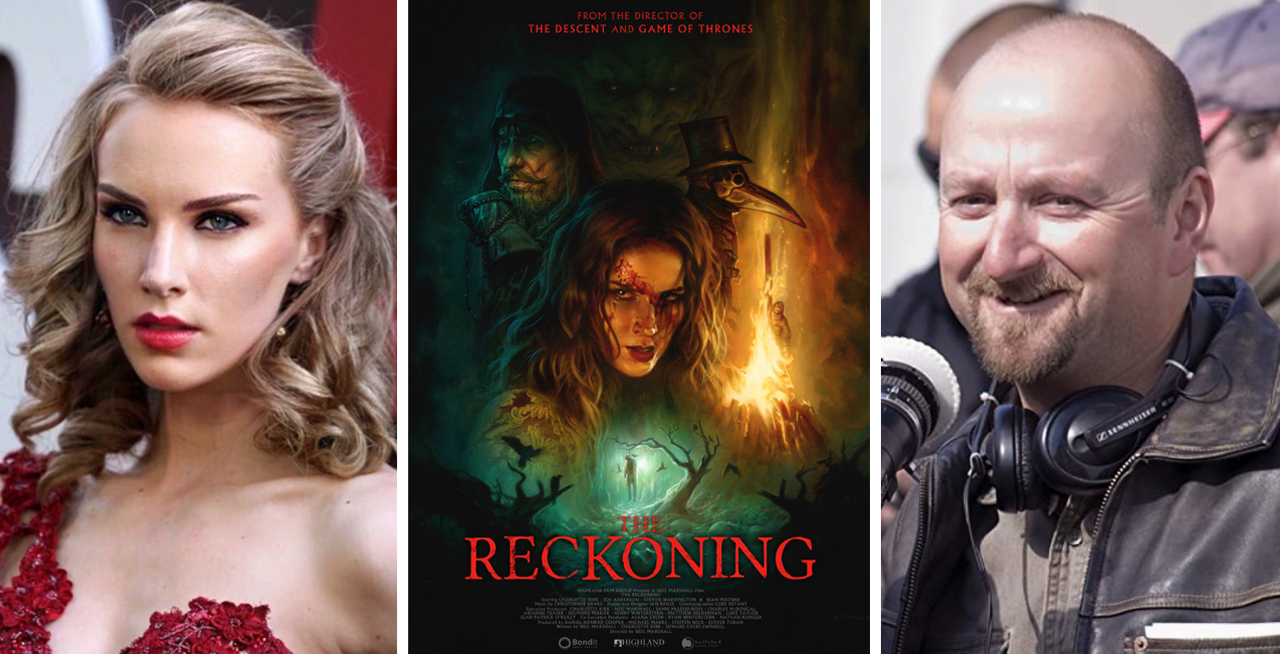 The lead actress Charlotte Kirk and the director Neil Marshall with the official poster of ‘The Reckoning’ – All rights reserved.

‘The Reckoning’ is co-written, co-produced and directed by Neil Marshall. Did you know each other before or was this your first time working together?

Neil and I have known each other for a while now, but this is the first time we’ve worked together. We wrote 2 very different movie scripts back-to-back in 2018. It proved to be a fruitful collaboration. As it turned out, The Reckoning was the first of the two to get made, and certainly presented some interesting challenges to both of us in our respective capacities as actor and director. But since we wrote them I guess we had nobody to blame but ourselves!! But we came out of it unscathed and a much stronger creative team going forward. We can’t wait to work together again.

If this past few months have proved anything it’s that fear and superstition are as powerful a forces as they’ve been.  We like to think that these kind of things happened back then people were ignorant and didn’t know any better. But when you see people on the news today saying that wearing masks, not only for your own protection but for the protection of others, is “the Devil’s work”…. Then you see nothing much has changed.

What is the message that your film and/or your character convey?

Never give up. Always protect the truth. Never let anyone tell you who you are, or who you ought to be.

A scene the from ‘The Reckoning’ directed by Neil Marshall – All rights reserved.

Do you have any on set stories you can share?

We were so lucky with the cast and crew they were all so invested in the movie as much as I was.  There was one day where I got a little too wrapped up in the performance and reality of the scene….   (Spoiler alert!) The scene involved me having to cut down my husbands body hanging from a tree. It’s in the pouring rain, in the mud, and I’m wielding a very heavy and very real broad sword. The stuntman playing my husband is hanging from a harness in the tree, playing dead. I literally can’t see a thing, can’t hear a thing, the movie rain was coming down so hard and I was swinging this sword around like nobodies business trying to make it look as convincing as possible. What I didn’t know was that with each swing I was inching/sliding in the mud closer to the stuntman, but I kept on swinging, half-blinded until I heard Neil, our director, calling out at the top of his lungs, ‘CUT!!!!’ On the last swing I’d apparently missed the stuntman’s head by about an inch!! So, close call, but thankfully nobody got hurt!

Neil and I are hoping to make the 2nd script we wrote next. It’s a crime thriller set in the world of diamond smuggling, called DUCHESS. It’s a very different project from The Reckoning and I’m sure will present a whole new set of challenges. But this is what I live for, so bring it on!